Some of you may know what a B Corp is already, some of you may not. But we’re certain you’ll have heard of some of the great brands that are proud to call themselves one (including yours truly).

For the uninitiated, B Corporations are businesses that balance profit with purpose. Like a Fair Trade stamp on coffee, B Corp status shows that a company gives as much weight to its social and environmental impact as it does to its financial returns.

There are 3,346 B Corps worldwide on last count. To qualify you have to undergo rigorous testing before a certification is administered to you by the non-profit B Lab which governs the process.

Form is celebrating it’s one year anniversary as a part of this club and to chime with our festivities, we decided to put together a list of other B Corps that we want to shout out about. Not only are they all making a great impact on society and the planet, but they’re also great businesses with great products. Basically, they’re brands we feel everyone else should want to champion too. In a social-distancing world, food boxes have been an invaluable resource, keeping people stocked up when they’ve needed it most. Mindful Chef has been perfecting their own since 2015, with recipe boxes stuffed full of ethically and sustainably sourced food, carefully curated to encourage healthy eating and cut out all those naughty refined sugars and carbs.

With meals that cater to all diets (gluten-free, dairy-free, vegan, vegetarians), the company also donates one school meal to a child living in poverty for every meal sold. That’s what we call being mindful in every sense of the word. The south-west coast of England might not be the warmest place to catch a few waves, but that hasn’t stopped the area from becoming a surfing hotspot. Cornwall-based surfwear brand Finisterre was started by founder Tom Kay to outfit these cold-water surfers (himself included) and this love of the ocean has translated into protecting it too.

Its plastic bags then are water-soluble and break down harmlessly into non-toxic biomass in soil and sea, while the brand is inspiringly transparent when it comes to their supply chain and materials. And its sterling impact doesn’t just end with sustainability either as its sea suit shows. Built to overcome barriers to surfing in countries where modesty laws make access to the ocean difficult for women, it’s a real testament to purpose-led design. The UK food industry wastes an estimated 1.9 million tonnes of food every year, contributing to over 20,000 tonnes of greenhouse gas emissions and costing the nation £4.35 billion each year.

That’s where Toast Ale comes in. All of Toast’s brews from its zesty pale ale to their refreshing craft lager have been made using surplus bread, up-cycling food that would just have been dumped while also replacing virgin barley in the production process and therefore reducing the demand for land, water and energy while they’re at it. They’ve now saved nearly two million slices since starting in 2016 while continuing to donate all of their profits to charities fixing the food system. Good chocolate is already a public service in our book, but Divine Chocolate goes above and beyond the pack when it comes to making a societal impact. Founded in 1998, Divine helped pioneer the Free Trade movement on supermarket shelves, and still remains the only Fair Trade chocolate company that is co-owned by cocoa farmers.

100,000 cocoa farmers from Ghana make up the farmers co-operative that holds the largest share in the business (44 percent), while the brand also runs some amazing initiatives including the promotion of gender equality and female empowerment on its farms (of the farmers who co-own the company, more than a third are women). They were also the first to make a caramel-filled chocolate bar with no palm oil to help combat the destructive impact cultivating the ingredient has on the world’s forests. Influenced by the holistic principles of Ayurveda (in Hindi, pukka means ‘real, authentic or genuine’), the teas at Pukka have not only been designed to taste great but also support your health with every sip. All of you regular Tea-Rex’s and Tea-Lo Greens will surely have heard of them, but it’s B Corp status is perhaps a little less well known.

Since being founded in 2001, the company has gone on to become one of the first companies in the UK to join 1% for the Planet, donating at least 1 percent of its annual turnover (sales, not profit) to environmental not-for-profits, as well as the first UK company of its size to have their climate goal of being carbon zero by 2030 validated by the Science-Based Targets initiative. It even offers company-wide mindfulness courses for all its staff. The concept of The Big Issue is rooted in social purpose. Founded by John Bird and Gordon Roddick (husband of Anita, founder of fellow B Corp, The Body Shop) in 1991, the Big Issue was created in response to the rising number of homeless people on the streets of London.

To become a vendor you have to be homeless or vulnerably housed. Vendors then receive training and certification, before being handed a number of magazines for free for them to then sell. From then on the vendors become their own micro-business, buying magazines off of The Big Issue for £1.25 before selling them at the cover price of £2.50 and netting the profit for themselves.

With start-up capital given to them by The Body Shop, the magazine started publishing monthly and went on to sell nearly 300,000 copies in the early 2000s before its current circulation of around 85,000. Since 1991, the magazine has helped over 92,000 vendors earn £115 million. TOMS kickstarted the espadrille’s renaissance at the tail end of the last decade, and it still makes some of the best in the business. Besides crafting breezy summer shoes, the brand now also does eyewear, coffee and handbags, but its the company’s charitable conscious that binds everything together.

The brand pioneered the one for one model, delivering a free pair of shoes to a child in a developing country for every pair it sold. As the the brand has diversified, it has now moved on from this model to give away £1 away for every £3 it makes. In total, TOMS has given nearly 100 million pairs of shoes away as well as 780,000 sight restorations and 722,000 weeks of safe water. Founded in 1976, The Body Shop started as a solitary health and beauty store in Brighton with just 25 products. The vision was simple: beauty products that were ethically-sourced, cruelty-free, and made with natural ingredients. The Body Shop has since gone on to become a global force, all while retaining its social and environmental beliefs.

Trailblazers for the Fair Trade movement in the 1980s and 1990s, The Body Shop even owned a percentage of Divine, until it handed its shares over to the Kuapa Kokoo cocoa farmers’ co-operative. B Corps stick together after all. The brand was bought by another B Corp, Natura, in 2017, the same year it launched its Forever Against Animal Testing campaign aimed at banning animal testing in cosmetics worldwide. By the end of 2018, the petition had reached 8.3 million signatures and been presented to the UN General Assembly. 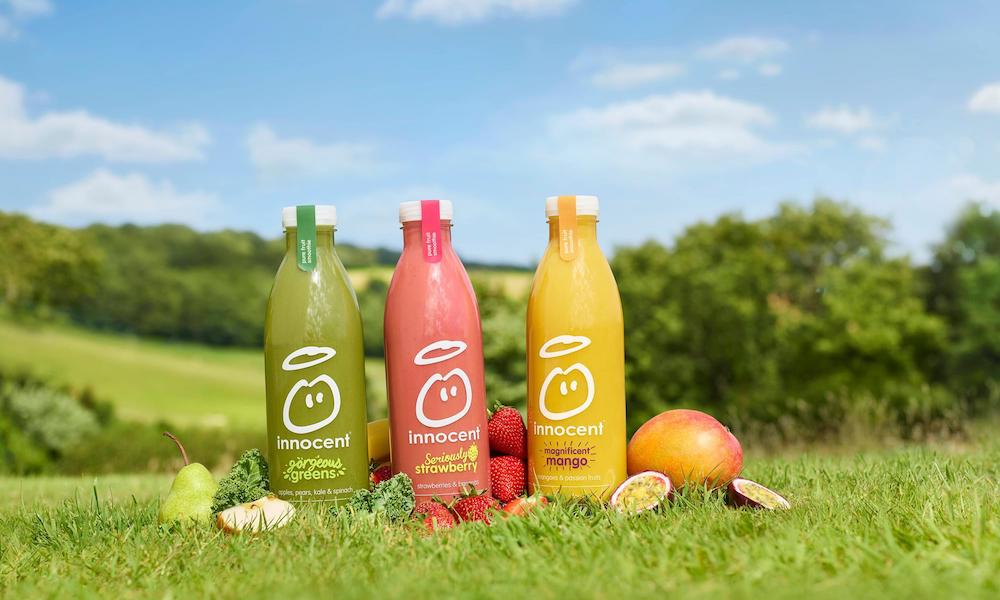 From a stall at a music festival to the chilled shelves of pretty much every supermarket in the country, Innocent has become almost synonymous with the smoothie here in the UK having helped the nation get in there five-a-day for over 20 years.

Along with the benefits of fruit and veg, Innocent also understands the impact of wasteful water practice, developing an app that calculates optimal daily irrigation time which in 2015 helped participating farmers save 1.7 billion litres. The brand is also closely linked with a number of charities from OXFAM to The Trussell Trust. It donates 10 percent of its total profits to charity, mainly through the Innocent Foundation, which gives grants to charities so that they can help the world’s hungry. As outerwear and sustainable fashion have slowly inched forward in the fashion cool stakes, it’s undoubted king, Patagonia, has become one of the most talked-about labels around. The brand is as authentic as they come though and any talk of trends would probably lead to a collective wince.

Founded by legendary rock climber Yvon Chouinard in 1957, the brand has a deep link with the mountaineers they design their wares for and this love for the sport and nature has developed into an impressive sustainable sensibility. Take their Worn Wear scheme, which promises store credits for anyone who wants to return their Patagonia apparel to then be sold on. Or its hero piece, the Responsible-T, a range of t-shirts made with scrap fabric and discarded bottles that use 96 percent less water than a conventional cotton tee.

Calling sustainability a trend is shallow. But the success of Patagonia shows that those who truly succeed are the brands that have sustainability hardwired into their DNA.

Want to find out more about Form’s B Corp status? Read our interview with Form founders Natalia Bojanic and Damian Soong here, where they explain why Form became a certified B Corporation.