From yoga raves to goat yoga, there’s a lot of weird and wonderful types of yoga out there these days, not all of which we can deign to call a ‘discipline’.

To some yoga is just a bunch of weird stretches, but these ‘proper’ disciplines will subvert those expectations. Each comes with their own rules and purpose, some strict, others less so. The practice of yoga can be traced back to 1500 BCE, and, for some, a discipline has to be deeply indebted and rooted in this history.

“I think there is this distinction between yogas that are grounded in a lineage and in authenticity and yogas that are, shall we say, in their infancy and that do not have any roots,” says yoga teacher Ahmed Zambarakji. “I only practise a handful of styles. I’m not an Ashtangi but what I practise is very much derivative of Ashtanga, which we’ll get to later.”

To help introduce you to the main disciplines you need to know, we’ve asked Zambarakji to help us breakdown what makes each one different so you can decide which one will work for you.

In Short: Physically demanding and disciplined, Ashtanga is the basis for many other forms of yoga.

Best For: Those who also want to get a workout out of their yoga session. By its simplest definition, Ashtanga is a set series of 41 asanas, or body postures, split into four series in a sequence that does not change.

“It is very discipline-based,” notes Zambarakji. “It’s a fantastic system but it’s didactic. It’s you do it this way and there’s no working around it if you know what I mean. So it tends to suit people that like structure.”

A lot of yoga classes that aren’t necessarily straight-up Ashtanga will incorporate elements of the discipline into the teaching.

“Power classes are hard, sweaty and dynamic, and, for the most part, a lot of them are based on Ashtanga. Most ‘power’ classes would start with Sun Salutations A and B, which is the same Ashtanga. So if you think of, Rocket yoga and all those dynamic forms of Vinyasa; they’re normally taught by people that have practised or continue to practise Ashtanga.”

In Short: A relatively gentle discipline where poses are held for longer than normal, Hatha is deeply rooted in ancient tradition.

Best For: Those interested in slowing it down and focusing on the breathing and mindful aspects of yoga. While most of the more popular styles of yoga tend to be very dynamic, constantly switching from one posture to another, Hatha sits on the opposite end of the spectrum.

“It’s quite different in that it’s static postures,” explains Zambarakji. “In other words, you enter the posture, you perform it, you exit it, and then you do the next one. There’s no weaving together of the postures. Because of the pace, I think it allows you to acquaint yourself fully with the feeling of being in an asana, being in a certain shape. It’s a very authentic form of yoga. You just won’t find it on that many schedules anymore. Vinyasa tends to be a lot more popular.”

Asanas (yoga postures) and Pranayama (breathing exercises) are the two main exercises that encompass a Hatha yoga class. The word Hatha is roughly translated as ‘sun moon’ and this idea of two opposites is a central theme in the discipline.

“It’s looking to find that point of equanimity in between two extremes. The point between masculine and feminine, between light and dark, sun and moon. It’s designed to balance you at all levels. So you will be balancing out those polarities physically, mentally, emotionally, spiritually. If you look at some of the more ancient texts of yoga, what they describe is Hatha yoga.”

In Short: A strict discipline that concentrates on posture alignment and a deeper understanding of how the body works.

Best For: Rehab patients, or those with health and posture issues. B. K. S. Iyengar is one of the founding fathers of yoga in the West and was even named by Time magazine as one of the 100 most influential people in the world.

A prolific writer, Iyengar was a sickly child growing up. “My arms were thin, my legs were spindly, and my stomach protruded in an ungainly manner,” he wrote. “My head used to hang down, and I had to lift it with great effort.” His way into yoga then was for health and posture purposes and this remains the bedrock of the discipline.

“Iyengar classes are amazing in the breadth of knowledge that a good Iyengar teacher has when it comes to anatomy,” says Zambarakji. “Iyengar teachers have to go through gruelling training, and so, the amount of knowledge you get from a certified Iyengar teacher is probably more than you bargained for. If you’re looking to find out about how to fully and safely mobilise the hip joint, and how that influences the leg, knee, ankle and toes, then Iyengar’s your thing.

“In an Iyengar class, a teacher might spend 30 minutes setting up a posture. You get the best cues and the best understanding of how the body works and what is the optimum alignment for your body though. His writing is incredible too. I always dish out his books to students or people that want to learn more. I feel like everyone should have Iyengar as their staple diet. That’s your square meal. Your greens. Your protein.”

In Short: Movements and breathwork that awaken the spine, and a deep focus on helping participants reach moments of enlightenment.

Best For: Those more interested in the philosophical and transcendental elements of yoga. 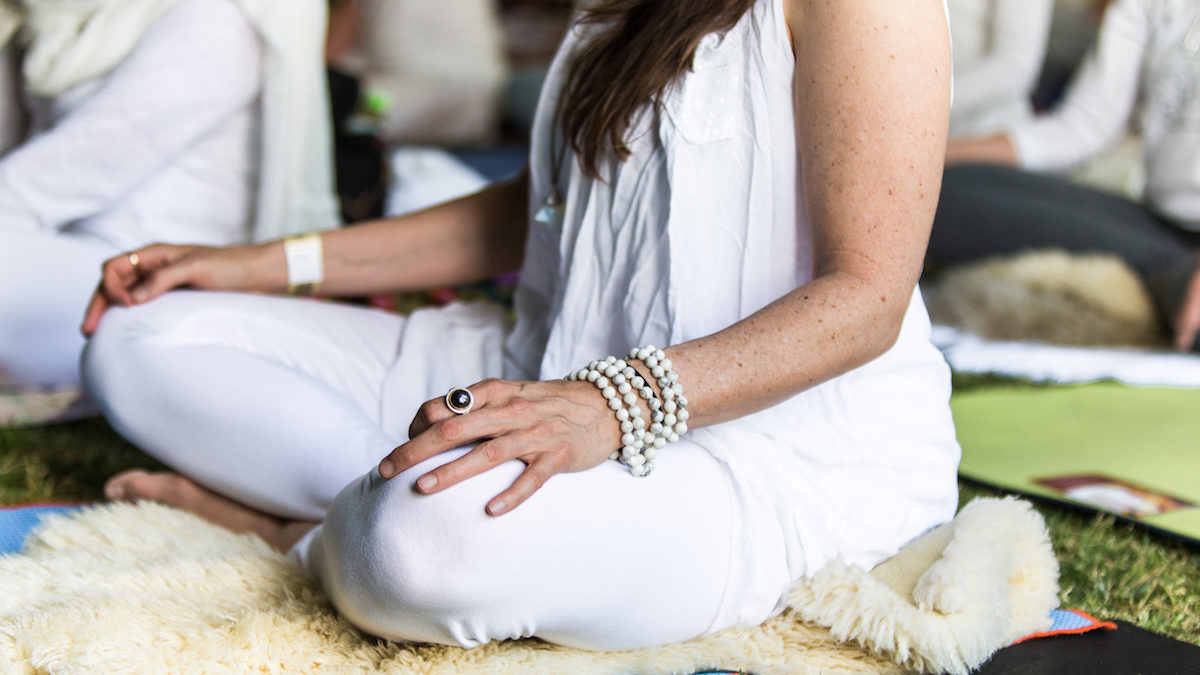 The purpose of Kundalini yoga is to awaken Kundalini Shakti, a mystical serpent in the base of the spine (figuratively, of course). This energy is then pushed through the chakras of your central energy channel which is thought to lead to moments of enlightenment at the end of it.

“I’m not a Kundalini yogi, but physically it’s very, very different to Hatha or Vinyasa,” notes Zambarakji. “The philosophy definitely takes centre stage in a Kundalini class. You’ll recognise the Kundalinis because they wear white.”

While the purpose of all yoga is to transcend the body and reach moments of enlightenment, Kundalini puts that message front and centre.

“It’s very much the central objective of Kundalini yoga, whereas I think with other forms of yoga, it’s something that I think some teachers shy away from, or they can gloss over. A lot of teachers in the West shy away from spirituality. And there are a lot of people that practise yoga that just don’t want the spirituality. They just want the biomechanics and the movement and the sweat and how it makes them feel. In Kundalini, you’re reminded that yoga is, in essence, a spiritual practice.”

In Short: Also known as yogic sleep, Nidra is a meditative process that induces calm in the practitioner.

Best For: Anyone in need of a reset. One part guided meditation, another part light snooze, yoga Nidra, or yogic sleep, is a powerful technique that promotes relaxation and recuperation.

As you rest comfortably in Savasana (back against the mat, arms loose at your side), a systematic meditation will then take you through the Pancha Maya Kosha (five layers of self), leaving you with a sense of wholeness by the end of the class.

“You lie down on your back and get cosy. And the teacher’s guiding you into a sort of hypnogogic state by bringing your awareness to certain parts of the body in a particular sequence,” explains Zambarakji. “So you’re not supposed to fall asleep, as it were, but you are in this sort of in-between state. It’s deeply calming and relaxing, and brilliant for people that perhaps find it hard to switch off or have a bit of a monkey mind.”

In Short: The most popular style of yoga in the West, Vinyasa is a dynamic discipline that moves from one pose to another quickly and seamlessly.

Best For: Those who enjoy movement. Vinyasa is the most popular style of yoga in the world. Sometimes referred to as Flow yoga, Vinyasa is highly dynamic, with the class stringing postures together so that you move from one to another, seamlessly, using breath. The breadth and variety of postures available means that no two classes are ever alike. This adaptability means a Vinyasa class can be adapted to suit all levels.

According to a 2013 study in the Journal of Yoga & Physical Therapy, the fast-paced movements and physical challenge of Vinyasa yoga make it an ideal light-intensity cardiovascular workout.

“Vinyasa is the marriage of movement and breath, so you are constantly moving from one place to another,” says ZambarakjI. “It’s the sort of stuff that you will see most regularly on TV or social media.”

In Short: A younger form of yoga, Yin incorporates a series of long hold static postures, with an emphasis on relieving tension.

Best For: Anyone looking to increase their mobility and calm their mind. Yin and Restorative, they’re not the same but they are similar. Let’s start with Yin first though.

“Yin tends to work with the fascia [the connective tissue that surrounds your body parts], so you’re in static postures for extended periods of time,” explains Zambarakji. “You might be in a posture for five or six minutes at any one time.

“The idea here is that you’re not firing up muscles. You’re not being super duper active in anything, and in the process, you’re allowing the body to release and the fascia to unravel.”

A relatively new form of yoga, Yin isn’t as indebted to a Vedic lineage as others on this list.

“Yin is relatively modern, but that doesn’t mean it’s not effective. It just mixes philosophies quite a lot. So you’ll find elements of Chinese medicine and the meridian system in class. It feels good and I love doing it.”

In Short: Similar to Yin (they are often mistaken for each other), Restorative is primarily inactive.

Best For: Those coming back from an injury, or beginners looking to ease themselves into the practice. We’re messing with our A-Z here, but restorative leads on nicely from Yin, so in the name of clarity we’re going to upset the alphabet gods just this once.

The main difference is Restorative is inactive, with each stretch supported and passive. Props like folded blankets, bolsters (like a cushion foam roller), or yoga bricks (a firm, foam block) come in handy here, although Yin also uses props to help the practitioner ease into position and hold it for longer. The physical feeling is minimal though, whereas Yin welcomes the challenge that comes with a stretch. With the props doing the leg work, your muscles are then allowed to relax more deeply as a result.

“People usually find their way to Restorative post-injury,” says Zambarakji. “It’s very much about rehabilitating the body.” Restorative classes are mellow and great for stress relief, which also makes them a great introduction to yoga in general (as with Yin).