If there’s one thing we learnt in lockdown it’s that you can’t beat a home-cooked meal lovingly prepared by yourself. Add to that the fact everyone’s that bit more concerned with their health and eating well, along with the unstoppable rise of vegan cuisine, and it’s no surprise the demand for vegan cookbooks has risen exponentially.

And there’s some brilliant offerings out there to meet those needs. No longer are we forced to scour celebrity chef collections for token plant-based offerings, as recent waves of vegan cookbooks now tick boxes across every possible dining context.

Here’s our favourite vegan cookbooks then in the hope they can take your post-lockdown, home-cooked creations to whole new heights.

Vegan: The Cookbook, By Jean-Christian Jury

Author Jean-Christian Jury is a visionary leader in the plant-based world, and this guide brings to life his awe-inspiring experience and creativity with straightforward instructions and beautiful photography for nearly 500 recipes inspired by the cuisines of countries ranging from Albania to Zambia, highlighting regional fruits and veg, traditional cooking techniques, and universally delectable flavours as you go along.

Activist and author Bryant Terry trained at the plant-based, health orientated Natural Gourmet Institute in New York before founding b-healthy! in 2001, an initiative created to raise awareness about food justice issues and empower people to campaign for a more just and sustainable food system.

He has since gone on to become one of the most celebrated food writers in the vegan space, with five recipe books now under his belt.

Vegetable Kingdom is his latest and is a real treat for vegan food lovers. Organized by ingredient, it’s easy to make your way around the book while Bryant covers the basics of vegan cooking, with breakdowns on putting together flavourful salads, whipping up delicious soups and stews, and elevating seeds and legumes. Millet roux mushroom gumbo and citrus and garlic-herb-braised fennel are must-tries. Vegan: The Cookbook, By Jean-Christian Jury Queen of the spiralizer and one of the most recognisable faces in plant-based eating, Ella Mills aka Deliciously Ella, released her new book of 100 quick and easy plant-based recipes earlier this month to much excitement. An instant bestseller, it builds on Mills’ accessible but super-healthy manifesto with digestible insights from her chart-topping podcast and media empire interspersed alongside the recipes.

All of the dips, spreads, and vegan mayos sound and taste scrumptious (you can’t go far wrong with harissa-spiced hummus and. roasted garlic and chive spread), while the baking section is as delicious as Ella’s recipes have always been.

Having become an Instagram sensation for their snappy vegan recipe videos, duo Henry Firth and Ian Theasby have released four vegan cookbooks, including this, their latest.

The two former digital marketeers credit New Year’s resolutions and the Kip Andersen documentary Cowspiracy as their reasons for turning to plant-based nutrition, and Bish Bash Bosh! follows on from their previous best-sellers with everything from quick, weeknight suppers to plant-based party showstoppers.

Highlights of its recipe collection include vegan iterations of the classing English Ploughman’s, a completely plant-based mezze platter, and some top-notch mashed potato variations. Vegan cooking enriched by the West African and Caribbean roots of author and blogger Rachel Ama, lifts this vegan cookbook above the pack.

The recipes themselves are quick and easy, often just using one pot with supermarket-friendly ingredients and a song recommendation for each dish to boogie around the kitchen to while you’re cooking up a storm. In sum, this is vegan cooking without pretence – fun and down-to-earth; much like Ama herself.

And though the high-end appearance of her dishes may at first seem intimidating and unobtainable, the recipes are surprisingly simple to make and all offer show-stopping results, regardless of whether you’re vegan or not.

Don’t be fooled by the fact that this reads less like an ode to plant-based benefits and more like a stunning gastronomic adventure; one of the book’s greatest accomplishments is its consideration of food waste. Who knew, for instance, that there were so many uses for leftover chickpea water? A guide to both veganism and desserts gets two thumbs up in our book. Instagram star Anthea Cheng shares some real show-stoppers here and all while proving that bakes can still be fluffy and moist without any animal-derived ingredients.

Tiramisu trifle with popcorn chopped up on top catches the eye, as does every single fruit-crammed tart. With recipes for beginners as well as more complex creations, there’s also some great cooking advice sprinkled about the book too, for those who fancy going a bit off-piste in their vegan culinary endeavours.

On Vegetables: Modern Recipes for the Home Kitchen, By Jeremy Fox

Behind the simple but beautifully illustrated cover of Jeremy Fox’s On Vegetables is a treasure trove of recipes where vegetables take centre plate.

Fox has a reputation for game-changing vegetarian cuisine, having made a name for himself at the Michelin-starred Ubuntu. Here, his food philosophy is translated for home cooks to bring out the best in seasonal produce, most mouth-wateringly done in his varying incarnations of the under-rated artichoke. 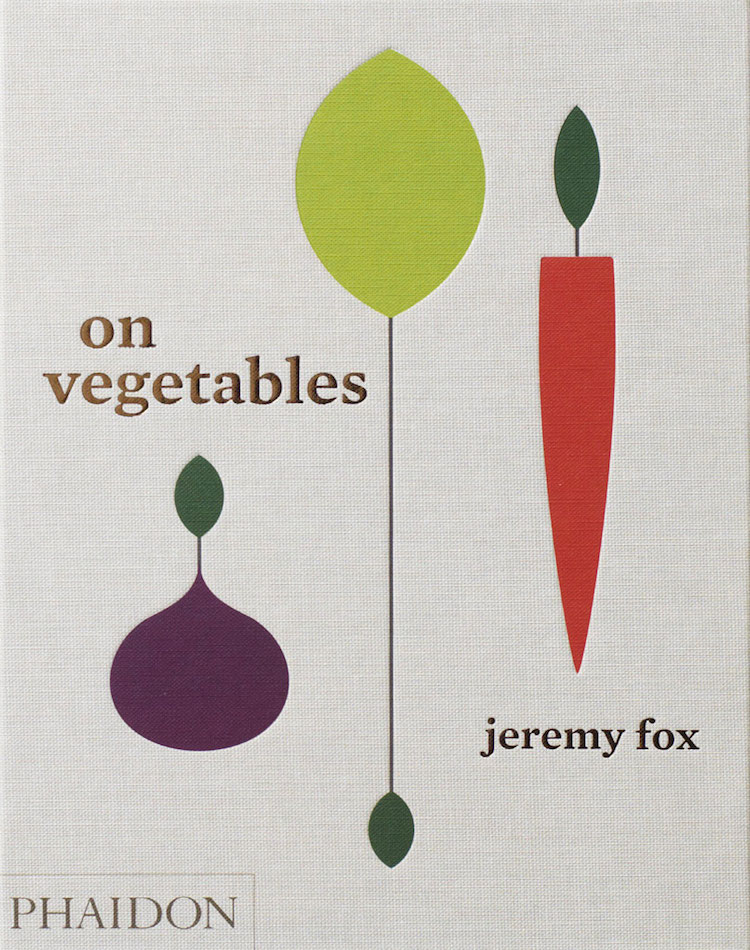 On Vegetables: Modern Recipes for the Home Kitchen, By Jeremy Fox

Vegan 100: Over 100 Incredible Recipes By The Avant-Garde Vegan, By Gaz Oakley

If you’re a meat-eater looking to introduce more vegan meals into your diet then chef Gaz Oakley is your man. Having worked his way up through numerous professional kitchens Oakley made it big with his successful YouTube and Instagram channel under the Avant-Garde Vegan alias.

That professional kitchen foundation and a love of food from a young age raises Oakley above the Youtuber pack and in both Vegan 100 and his guide to vegan Christmas, his reworking of classic dishes with vegan alternatives (think vegan ‘steak’ wellington and kentucky fried ‘chicken’) never compromise on big, bold flavours despite the changes.

The incomparable Yotam Ottolenghi pieced together Plenty from recipes in his “The New Vegetarian” column for the Guardian’s Weekend magazine, with a dash of some all-new concoctions in the mix too. Vegan 100: Over 100 Incredible Recipes by the Avant-Garde Vegan, by Gaz Oakley Let’s face it, when you’re crashing on a Wednesday evening, all you want is something quick and easy, without having to skimp on the nutritious side. That’s where these cracking recipes from the creators of social media sensation So Vegan come in super handy.

The premise is exactly as described: 80 tasty vegan recipes all of which you can cook up in no time at all using one pot. Minimal fuss, maximum flavour. Be sure to check out the tempting peanut butter swirl brownies and the comfort food heaven that is their pearl barley chilli.

Veggie curries are par for the course for any spice-loving vegan, but cutting out the dairy from your sauces is a harder code to crack. This book is an invaluable resource then. Voted one of the best food books of 2019 by The Observer, it sees celebrated chef Romy Gill rise to the challenge with an array of mouth-watering Indian dishes, and all with not a single dairy product in sight.

The smoky aubergine baingan bharta is a star, as are the turmeric pancakes, one of the highlights among the exciting side dishes Gill has on offer. 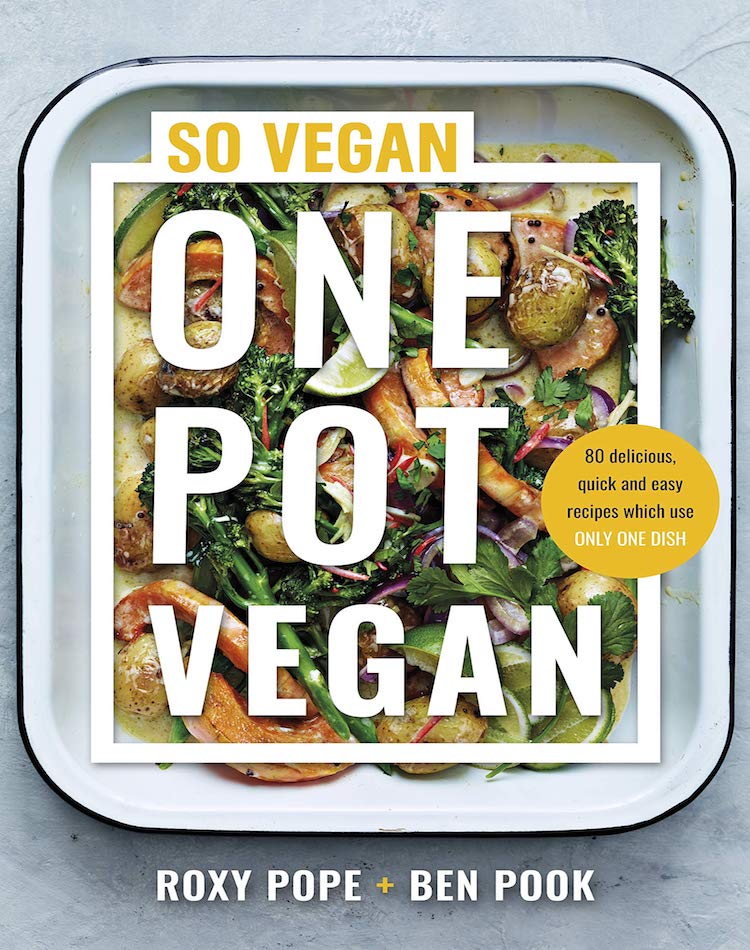 One Pot Vegan, By Roxy Pope And Ben Pook Having sold over one million copies of her hugely popular The Roasting Tin cookbook series, Rukmini Iyer has become a firm part of the cookbook writers pantheon. The series is all dinners you can cook up in one dish, so in this veggie version expect homely bites like crispy tamarind sprouts with salted peanuts and shallots, comforting oven-baked ratatouille with vegan parmesan, and beetroot, chickpea and coconut curry.

Do watch out as not all of the recipes are vegan, however, it’s usually the cheese that will catch you out so it’s quite easy to just swap in the vegan alternative.

The author of four cookbooks, former Masterchef winner Tim Anderson has been one of the undoubted successes from the TV show. Obsessed with Japanese culture since studying Japanese food history at college and living out there in his twenties, Anderson has made the cuisine his calling card, helming the popular Nanban chain of Japanese restaurants in London since 2015.

The recipes in this book are meant to be made easy, but those unfamiliar with Japanese food might struggle at first — especially with ingredient sourcing. But with a bit of perseverance, and a local Asian supermarket located, you should soon be rolling vegan sushi and whipping up sweet potato with truffled ponzu, like a natural.